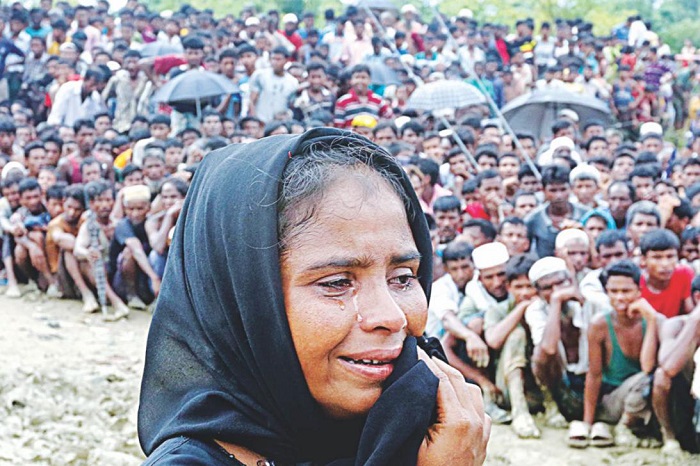 United Nations member countries should urgently act to ensure that those responsible for atrocity crimes in Myanmar are held to account, Human Rights Watch said. The UN Security Council should refer the situation in Myanmar to the International Criminal Court (ICC), and concerned governments should immediately present a UN resolution to establish an International, Impartial and Independent Mechanism (IIIM) to preserve evidence and assist in investigations for future prosecution of those responsible for atrocity crimes in Myanmar.

On August 27, 2018, the UN-mandated Fact-Finding Mission’s three experts issued a report documenting Myanmar security forces’ abuses against the ethnic Rohingya population, including, but not limited to, murder, rape, and torture, and concluded that they amounted to crimes against humanity and war crimes. It also found that the systematic oppression and discrimination amounted to persecution, and may also amount to apartheid. The report also concluded there was sufficient information to warrant prosecution of senior military officials to determine liability for the crime of genocide, and named six senior commanders. The report also detailed abuses committed by Rohingya militants and called for them to be held to account.

“The Fact-Finding Mission’s powerful report and clear recommendations demonstrate the obvious need for concrete steps to advance criminal justice for atrocious crimes, instead of more hollow condemnations and expressions of concern,” said Brad Adams, Asia director at Human Rights Watch. “UN member states should step up efforts that include the urgent creation of an International, Impartial and Independent Mechanism to ensure those most responsible for grave crimes do not escape prosecution.”

The 20-page report consisting of its main findings was based on 847 interviews, satellite imagery, authenticated documents, photographs, and video, and covered serious abuses in Rakhine, Shan, and Kachin States from 2011 to the present. In addition to the atrocities documented in Rakhine State, the Fact-Finding Mission found that crimes against humanity and war crimes committed by the Myanmar military in Shan and Kachin States. It also detailed abuses committed by ethnic armed groups it said may also constitute war crimes. The report concluded that these violations reflect a longstanding pattern of conduct by the Myanmar military authorities and the need to end the cycle of impunity.

The report calls for the investigation and prosecution of cases by the ICC and raises the possibility of creating a special tribunal by the UN Security Council, similar to that created to prosecute grave crimes committed in the former Yugoslavia.

The report named six high-ranking military officials, including Sr. Gen. Min Aung Hlaing, as among those responsible for “a failure to take necessary and reasonable measures to prevent and punish crimes, and a causal link between these failures and the atrocities committed.” It determined that the civilian authorities were not in a position to control the military, but nonetheless contributed to the commission of atrocity crimes through their acts and omissions.

The report also recommends that UN member states urgently establish an International, Independent, Impartial Mechanism – similar to the Syria IIIM – to collect, evaluate, and preserve evidence to assist criminal investigations and prosecutions of atrocity crimes committed in Myanmar, including by third states using their universal jurisdiction laws. Such a mechanism should be mandated to consider crimes dating back to at least 2011, the primary period covered by the Fact-Finding Mission report, Human Rights Watch said.

Human Rights Watch has called on the UN Security Council and concerned governments to adopt an arms embargo and targeted sanctions, including travel bans and asset freezes, against Myanmar military commanders implicated in abuses, and to refer the situation to the ICC. Separately, ICC judges are considering whether the court has jurisdiction over Myanmar officials who forced Rohingya refugees to flee to Bangladesh, an ICC member, for the crime against humanity of deportation.

Since the Myanmar military’s campaign of ethnic cleansing began last August, several countries and multilateral institutions – including the United States, Canada, and the European Union – have imposed travel and financial sanctions on several Myanmar security force commanders, units, and individuals implicated in atrocities, the vast majority in Rakhine State. While these sanctions are important, they are not a substitute for prosecutions before credible, impartial, and independent courts, Human Rights Watch said.

The UN Human Rights Council established the UN Fact-Finding Mission on Myanmar in March 2017 because of credible and serious allegations of human rights abuses in late 2016. The mission’s mandate is to “establish the facts and circumstances of the alleged recent human rights violations by military and security forces, and abuses, in Myanmar […] with a view to ensuring full accountability for perpetrators and justice for victims.” The mandate was extended after the widespread abuses that began on August 25, 2017. The Myanmar government refused to cooperate with the Fact-Finding Mission and denied access to its experts and its staff.

“So far, condemnations without action by UN member states have only emboldened a culture of violence and oppression in Myanmar,” Adams said. “This report should eliminate any doubt about the urgency of investigating those responsible for mass atrocities. The time to act is now.”