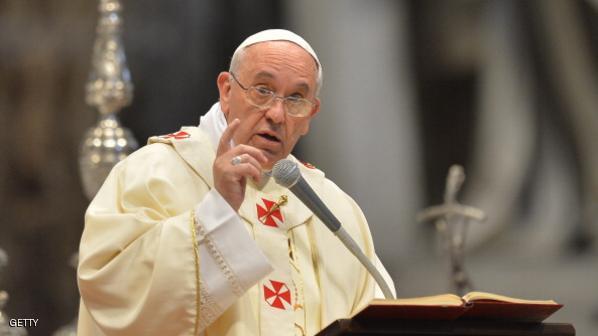 Pope Francis speaks during the ordination of new priests at St Peter's basilica on May 11, 2014 at the Vatican. AFP PHOTO / ANDREAS SOLARO (Photo credit should read ANDREAS SOLARO/AFP/Getty Images)

Supreme Pontiff of the Universal Church

We congratulate the birthday of Jesus Christ, the prophet of peace and friendship, and New Year to Your Holiness and followers of the great Prophet. We hope for peace and security of the world.

The birthday of Jesus Christ is an opportunity to recall the great aspirations of this great Prophet, which are loving one another, protecting the weak and fighting against ignorance and darkness. This Prophet was called to lead the people who were deprived of the path of prosperity, because of the ignorance of understanding the light, to salvation. This method, based on the promotion of peace and friendship, gained the love of the heart of the people of the world. It is contrary to what the powers aim to do by means of wickedness, crime and murdering  innocent humans today, which has remained nothing but darkness, hatred and horror.

Today, however, modern humanity is plagued with catastrophes resulting in insecurity, violence, extremism, terrorism and the victimization of innocent people. As Your Holiness have said “As long as the world economy is based on the God of Money and not the God of Mankind, terrorism continues to spread. In this case, violence and extremism do not associate to any religions.” We, families of the victims of terrorism in Iran, approve it and believe that terrorism is not an extremist and irrational understanding of religion, but it is an instrument to undermine religion and it is not related to any divine religion. We also swear an oath along with Your Holiness to counter any form of violence and abuse of religion which justifies terrorism.

What you have said is a good basis for undermining the roots of violence and extremism in the world and preventing the abuse of religion. The Association for Defending Victims of Terrorism believe that the promotion of this discourse can root out terrorism and pave the way for prosperity of human beings. Thus, all religious pillars and leaders will have great responsibilities and we hope that peace, although relatively, will dominate the contemporary worried people by implementation of such principles.