Home News On Universal Children’s Day Conference of “Grudge of Children, in Search of Justice” was Held 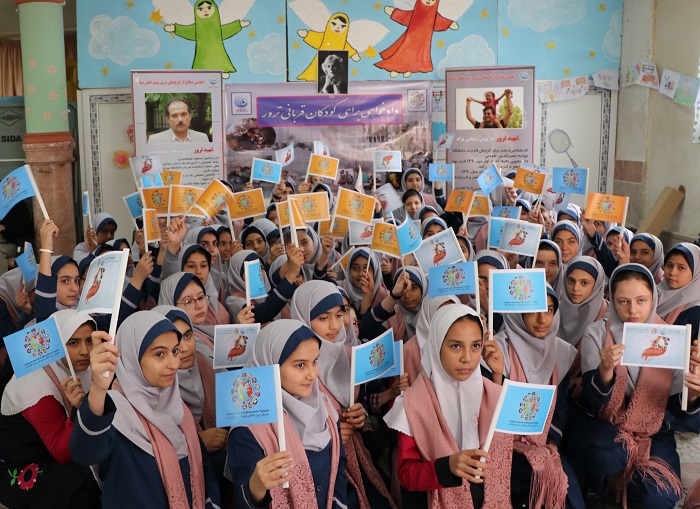 On Universal Children’s Day Conference of “Grudge of Children, in Search of Justice” was Held

Public Relations of the Association for Defending Victims of Terrorism – The conference of “Grudge of Children” was held in partnership with the Children’s Movement for Children, Ambassadors of Peace and Friendship Group and the Red Crescent volunteers attended by students, families of the children affected by terrorism and child rights advocates in Shokoufeh-haye Enghelab School.

At the beginning of the ceremony Ms. Naderi, the principal of Shokoufeh-haye Enghelab School welcomed the guests and congratulated Universal Children’s Day to the students. She thanked Association for Defending Victims of Terrorism and other organizations for celebrating and commemorating Universal Children’s Day. She Added “I hope that children and students to be pioneers of protecting child victims of terrorism strive to promote peace and harmony in the world.”

Ms. Mansoureh Karami, Vice-President of the Association for Defending Victims of terrorism, congratulated the Universal Children’s Day and commemorated the memory of all children affected by terrorism throughout the world. Ms. Karami said “today is the Universal Children’s Day and we gathered to litigate for child victims of terrorism. We see that innocent people, especially children are victimized by war and terrorism in different countries. For many years, a lot of children and their parents have been attacked by terrorists and many of the children affected by terrorism are members of our association.”

She said that members of Association for Defending Victims of Terrorism in collaboration with the Children’s Movement for Children gather to tell all child victims terrorism that they strive for the children’s lost rights. Ms. Karami concluded that “we understand the sufferings and pains of child victims of terrorism because we have experienced such incidents one day in our childhood.”

Ms. Haghpanahi, survivor of terrorism read a statement on behalf of the deaf children of doctor Saeedi entitled “Grudge of Children, in Search of Justice “. One part of the statement said that doctor Yahya Saeedi, was a kind father, a physician and a person committed to the poor of our country. Many poor students were introduced to him by mosques and Red Crescent to provide free treatment. Even he bought medicine for those who need more help. At weekends he went to his hometown, Amirabad village and provided free services.

According to documents, martyr Saeedi was the assassinated by Mujahedin-e Khalq terrorist group in collaboration with the former Iraqi dictator, Saddam Hussein and even they took the responsibility.

In another part of the statement, it was said that “as we see opportunities for children are lost by the violence and extremism of the malicious people and international organizations were not successful and they only condemned and provided humanitarian aid in some cases. Terror and horror of children is still spreading throughout the world.

Ms. Tayebeh Mohammad , Founder and Director of the Ambassadors of Peace and Friendship Group said “maybe it’s not true for children to talk about war and terror, but today awareness is essential to life, I would like to ask the students what violence is. What does preventing violence and extremism mean? Violence has as many meanings as the number of people in the world. War and terror are forms of violence. Learning and teaching are among the best ways to prevent violence.

Dr. Mohammad said doctor Saeedi was a humane person who served the people and did as much as he could to save human beings from suffering. He learned that human being is a priority, and those who assassinated him had learned destruction of humanity and chose doctor Saeedi for their purpose. After several decades, we still remember his name. We have many people like doctor Saeedi and what we have learned from them is patience.

Regarding the actions of terrorist groups, terrorism is not just a word, but it is a real bitterness and destruction of a generation. I do not know why everyone is silent. Perhaps if the world addressed bitterness of this destructive word, especially terror against children, the world was a better place to live.

Mr. Vahid Salimi Deputy of Volunteer Affairs of the Red Crescent of the province of Tehran congratulated the Universal Children’s Day and thanked the Association for Defending Victims of Terrorism and the staffs of Shokoufeh-haye Enghelab school. He said “one of the seven principles of the Red Cross and Red Crescent is the principle of volunteering. One of the communities which work voluntarily is the community of doctors. He appreciated the medical community and said Yahya Saeedi was a volunteer dentist who worked very closely with the Red Crescent and provided free treatment for those who approached the Red Crescent in the early 1980s. We are here today to thank the great efforts of this martyr, and introduce such people to the new generation.”

At the end of the ceremony Asa Ariani One of the students of Shokoufeh-haye Enghelab School read UNICEF statement on the occasion of Universal Children’s Day. One part of the statement said “When we protect their rights, we are not only preventing their suffering. We are not only safeguarding their lives. We are protecting our common future.”