Home News Pope Francis: silence the noise of weapons and listen to the cries of the defenseless 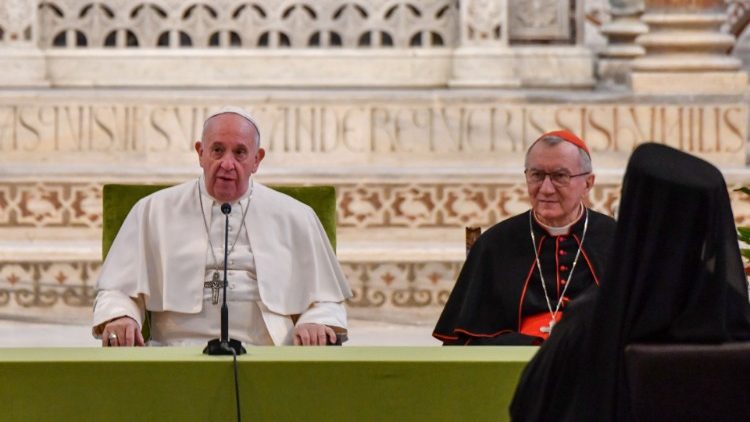 Pope Francis: silence the noise of weapons and listen to the cries of the defenseless

ADVTNGO – Vatican News website reported that, Pop Francis said to Mediterranean Bishops in Bari that Christianity impels us to act tirelessly as peacemakers.

He described war as madness and said: “War, by allocating resources to the acquisition of weapons and military power, diverts those resources from vital social needs, such as the support of families, health care and education.  As Saint John XXIII teaches, it is contrary to reason (cf. Pacem in Terris, 114; 127).  In other words, it is genuine madness; it is madness to destroy houses, bridges, factories and hospitals, to kill people and annihilate resources, instead of building human and economic relationships.  It is a kind of folly to which we cannot resign ourselves: war can never be considered normal, or accepted as an inevitable means of settling differences and conflicts of interest.”

He said about peace that: The ultimate goal of every human society is peace; indeed, we can affirm once more that “in spite of everything, there is no real alternative to peacemaking” (Meeting with Heads of Churches and Christian Communities in the Middle East, Bari, 7 July 2018).  There is no reasonable alternative to peace, because every attempt at exploitation or supremacy demeans both its author and its target.  It shows a myopic grasp of reality, since it can offer no future to either of the two.” He added: “War is thus the failure of every plan, human and divine.  One need only visit a countryside or city that has been a theatre of war to realize how, as a result of hatred, a garden turns into a desolate and inhospitable landscape, how the earthly paradise turns into hell.”

After this meeting and during his Angelus address in the Italian city of Bari, Pope Francis said that: while they were gathered “to pray and reflect on peace and the fate of the peoples of the Mediterranean”, a huge tragedy was taking place on the other side of this sea.

In a heartfelt appeal, Pope Francis urged the actors involved in the Syrian conflict and the international community “to silence the noise of weapons and to listen to the cries of the weak and defenseless.”

He also appealed for self-interests to be put aside “in order to safeguard the lives of civilians and the many innocent children who are paying the price.”