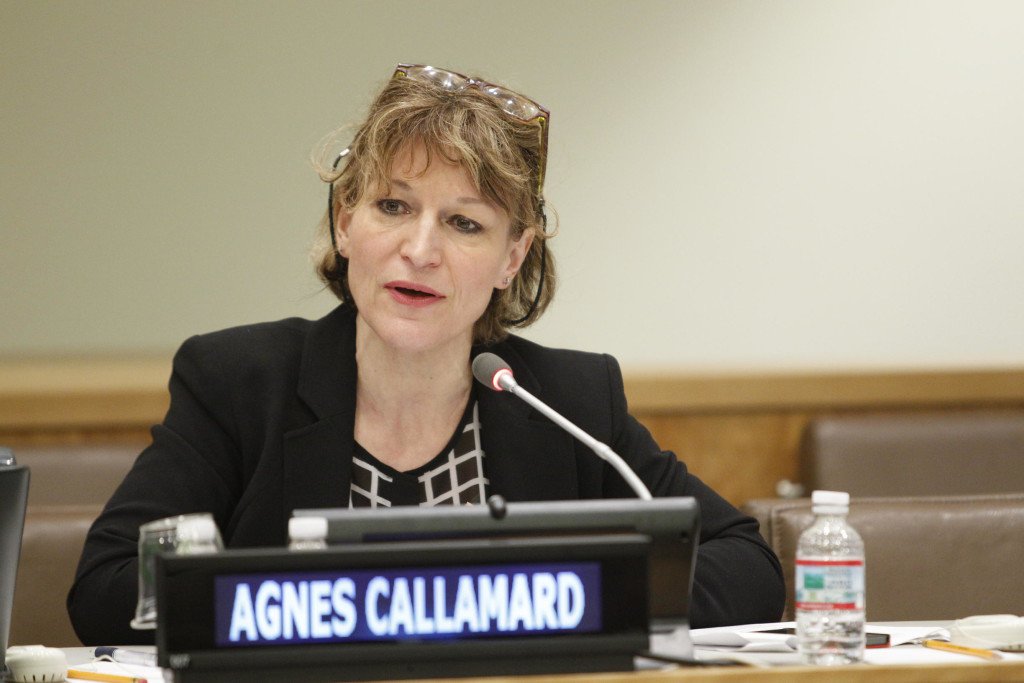 Agnes Callamard is the U.N. special rapporteur on extrajudicial, summary or arbitrary executions and director of Global Freedom of Expression at Columbia University.

The trial of 11 defendants in the murder of Jamal Khashoggi is underway in Saudi Arabia behind closed doors. But it is unlikely to deliver real justice. While five unnamed defendants face the death penalty, top Saudi officials have not been investigated or charged in Khashoggi’s brutal, premeditated killing.

As detailed in my report to the United Nations last month, the Kingdom of Saudi Arabia is responsible for Khashoggi’s extrajudicial execution, enforced disappearance and torture. The evidence suggests that 15 Saudi agents acted under their official status and used state resources to commit murder. High-level officials in Riyadh, the Saudi capital, oversaw the elaborate planning, which involved private jets, diplomatic clearances, a forensic doctor and Saudi consular staff in Istanbul. Saudi Arabia has since failed to investigate the crime in good faith.

[Read this piece in Arabic.]

Khashoggi’s murder is not a Saudi domestic matter. He was a journalist and U.S. resident who was extrajudicially killed in Turkish territory. Saudi Arabia committed an unlawful extraterritorial act aimed at violating freedom of expression, threatened the sanctity of consular relations and interfered with the interests of the international community as a whole.

It is extremely troubling that, thus far, there has been little effective international response — legal, political or diplomatic. Yes, the United States and the other permanent members of the U.N. Security Council are observing Saudi Arabia’s trial. But they have agreed not to disclose its details. Effectively, they are allowing themselves to be made complicit in what is, by all appearances, a miscarriage of justice. Some states have issued targeted sanctions against 17 or more individuals, but these fail to address the responsibility of Saudi senior leadership and divert attention away from the responsibility of the kingdom itself.

Around the world, public opinion has demanded justice for Khashoggi. Courts have ruled against the “business as usual” approach regarding arms exports. Legislators have taken steps to sanction Saudi Arabia. But these are rarely reflected in the policies of the executives — and, indeed, even overridden.

The readiness of some world leaders to move on from the case without action was made painfully clear last month during the Group of 20 meeting in Osaka, Japan, where the Saudi crown prince was warmly greeted by foreign leaders, including President Trump. This return to business as usual signals to Saudi Arabia, and to other states, that gross violations of human rights are tolerated. That message has been received loud and clear: Saudi Arabia’s well-evidenced campaign of violations appears to have continued with a number of recent cases. Without international action, it is clear that similar crimes will be repeated.

So, what’s next? The international community must step up its demands for an effective investigation into, and prosecution of, the masterminds of this crime. Justice for Khashoggi cannot depend on Saudi Arabia’s flawed prosecution. Other states should claim universal jurisdiction and try those responsible. The FBI can and should investigate the case, as this crime affects U.S. interests. Agencies should declassify relevant U.S. intelligence materials to ensure the full truth is uncovered.

The U.N. secretary general should also appoint criminal law experts to determine individual liabilities for Khashoggi’s killing, as has been done by other secretaries general in the past. The United Nations’ prevarication in the case thus far only weakens the institution. Moving forward, to address the risks of politization and paralysis, the United Nations should establish an international independent mechanism to undertake criminal investigations into targeted killings of journalists and human rights defenders.

Accountability should not depend on individual special rapporteurs. Nor should individual countries be forced to risk standing alone against powerful nations. The community of states must be prepared to demand adherence to fundamental norms. This could include a moratorium on the export of surveillance technology to Saudi Arabia. Targeted sanctions should focus on top Saudi officials, such as the crown prince, who may have ordered, incited or otherwise failed to prevent Khashoggi’s murder.

We must reject the argument that holding Saudi Arabia responsible and identifying culpable individuals no matter their status jeopardize geostrategic or economic interests. It is in the better interest of all countries that justice prevails. Holding Saudi Arabia to human rights standards should ultimately make it — and other states — a more reliable partner. That should also require not holding the next G-20 meeting in Riyadh.

In the aftermath of World War II, the international community came together to affirm fundamental principles aimed at protecting human rights and maintaining peace. Abandoning those principles dishonors the millions of individuals who sacrificed their lives and those, like Khashoggi, who continue to do so. Norms degraded for expediency or politics are not easily regained.

Khashoggi’s murder is emblematic of a global trend of violence against journalists, human rights defenders and political activists. There are clear signs of increasingly aggressive tactics by states and nonstate actors to permanently silence their critics. The international community must take stock of this hostile environment. Silence, inaction or, worse, tacit or explicit complicity will only cause further injustice and global instability. The time to act is now.