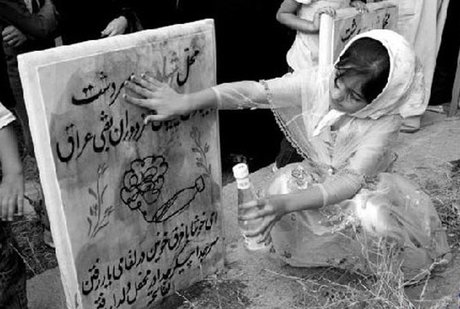 Association for Defending Victims of Terrorism public relations – Farideh Shafei, one of the victims of Saddam’s chemical attack on Sardasht in a letter to the UN Secretary General, called him on to bring the perpetrators of this shocking crime and other similar crimes to justice.

The text of this letter, entitled “the Burnt in Western Civilization”, is as follows:

The Burnt in Western Civilization

I am Farideh Shafei, a teacher who was chemically injured along with many others in the city and my three daughters in 1987 at the best days of my youth in Saddam’s crime of chemical attack on the people of Sardasht,

On 28 June, 1987, I had gone to my sister’s house with my children. Shabnam was 7, Shahla was 3 and Nahid was 2 years old. Within minutes, the roar of a warplane suddenly frightened us. On that day, all the people were terrified and the children were crying, but before anyone could do anything, the warplanes dropped their bombs on us. We all went to the basement.

A large amount of gas had accumulated in the basement. After inhaling the mustard gas, my daughters and I began to cough, our eyes and skin began to burn, and our eyesight blurred. In those bitter moments, I was looking for a way to help or save them. With a little water, I washed their faces, but it was too late, and the mustard gas had affected them although washing their eyes was like a miracle and prevented them from becoming blind.

Every year, a few days before 28 June until a few days after it, I cry. I was a 27-year-old mother with 3 daughters. Whenever I remember the memories of that day, I become 100 years older. Is it possible for me to forget the memories of that day at all? Since then, I and my children have never had a good time. Since then, we suffer so much with a small cold, which it is inexpressible.

That day was the worst nightmare of our lives because there is no end for the incident and its consequences. People have been quarantined for a few months currently because of Coronavirus, but my daughters and I have been in quarantine since 1987. However, since the outbreak of Coronavirus, I only leave home for chemotherapy and going to a doctor’s office, and I stay at home for the rest of the time. These days, I am alone. Because of the condition of my eyes, I cannot even read, which is one of my entertainment.

The consequences of that crime for me and my daughters are becoming more and more difficult every year. Now one of my eyes is completely blind. For the past 10 years, due to the effects of this catastrophe I have caught an incurable disease, which has greatly increased my problems.

In 1990, the Hague Tribunal granted us the right and even approved the need to get compensation, but it was forgotten. I remember that the judge said that it had been proven to him that we are right and the United States, Germany, etc. played role in this issue, but later no one was held accountable.

Today I heard your message on the occasion of the Day of Remembrance for all Victims of Chemical Warfare, especially in the part that you said, “It is imperative that those who use, or have used, chemical weapons are identified and held accountable.” That is why I want to say that the perpetrator of the crime of attacking the city of Sardasht was not only Saddam and the Ba’athist regime. Those who provided this criminal with chemical warfare and then used the injured as the examples of the successful use of their weapons are in fact the main perpetrators of this crime and other similar crimes.

My request is the same as yours and that is they must be held accountable. Now, after 33 years of enduring the pain of that tragedy with my children, this part of your message can be a little healing for our endless pain caused by chemical terrorism.

We hope to be alive and to see your promise to bring to justice the criminals who were Saddam’s accomplices.

Thank you for your attention

Farideh Shafei and her daughters