Home News Beasley : It is hell on earth in many places in Yemen 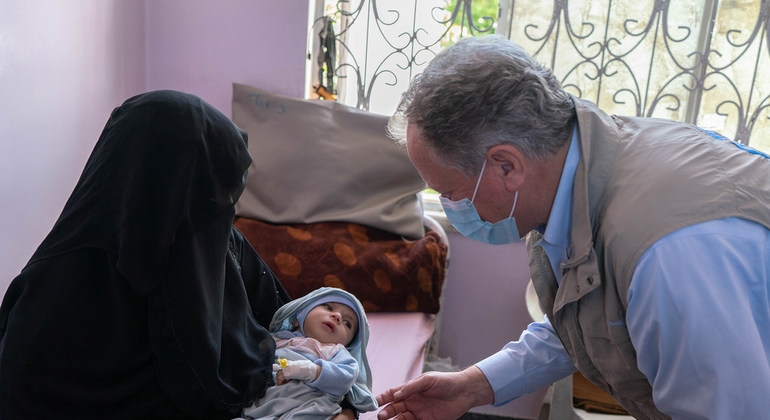 Beasley : It is hell on earth in many places in Yemen

Association for Defending Victims of Terrorism – Over half the Yemen population is facing acute food shortages “with millions knocking on the door of famine”, the UN food relief agency chief said on Wednesday, wrapping up a two-day visit to the country with an urgent plea for peace and funding to help feed vulnerable families.

In the capital of Sana’a, the UN official witnessed first-hand the devastating toll of malnutrition on Yemen’s children during a hospital visit where 2.3 million under-five, are projected to face acute malnutrition this year.

Mr. Beasley noted “dead silence” in children’s hospital wings as the children were “too sick and too weak to either cry or laugh”.

“But they are still the lucky ones who were able to make it to the hospital”, Mr. Beasley added. “Many poor families cannot afford the cost of transportation to bring their children to hospitals or they arrive and are turned away because there are not enough beds for their sick children.”

“This is hell. Absolutely horrendous. Yemen is becoming the worst place on earth and it is totally man made”, said Mr. Beasley.

“Just two days ago, I was in Yemen, where over 16 million people now face crisis levels of hunger or worse. These aren’t just numbers. These are real people. And we are headed straight toward the biggest famine in modern history. It is hell on earth in many places in Yemen right now.”

He added: “Around 400,000 children may die in Yemen this year without urgent intervention. That is roughly one child every 75 seconds. So, while we’re sitting here, every minute and a quarter, a child is dying. Are we really going to turn our backs on them and look the other way?”