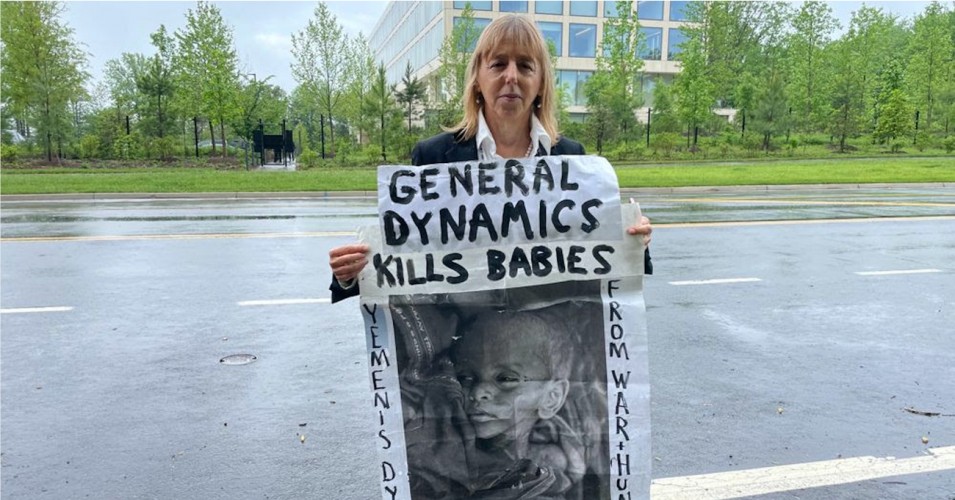 Association for Defending Victims of Terrorism – based on Common Dreams website,  CodePink co-founder Medea Benjamin attended the annual meeting in Reston, Virginia and calmly confronted Novakovic about her company’s weapons sales to countries including Saudi Arabia, the United Arab Emirates, Bahrain, and Egypt. She specifically mentioned a March 25, 2016 Saudi-led airstrike that hit a crowded marketplace in the Yemeni village of Mastaba, killing scores of civilians.

“How is it morally responsible to be engaged in a war in Yemen where now as a result of that war, every 75 seconds a child dies from war and hunger?” Benjamin asked. “My heart goes out to the children of Yemen and I was wondering if you think about them as well, because while they are dying, people in this company are making profits off of them.”

Novakovic replied by accusing Benjamin of spreading “potentially libelous and incorrect information” that is “born from a lack of knowledge.”

The facts, as determined by Human Rights Watch and reported by the New York Times and others, are that a General Dynamics MK-84 2,000-pound bomb was dropped on the Mastaba market, and that 97 civilians—25 of them children—were identified as victims. Another 10 bodies were burned beyond recognition.

Benjamin pressed Novakovic on General Dynamics’ sales to Saudi Arabia: “The Saudi regime is evil, and you provide them with weapons. Is there anything moral about supplying Saudi Arabia with weapons?”

“If you have a model where you need global conflict, where you need wars in order to make money, I think there’s something fundamentally wrong with the company and you ought to have some more moral reflection about how you earn your billions of dollars,” Benjamin asserted.

“The worst thing for your company would be if peace breaks out in the Middle East,” Benjamin said,