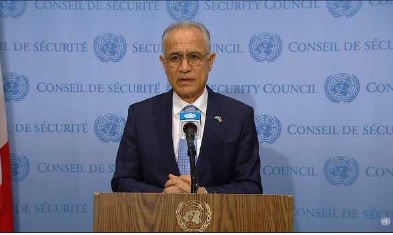 10,000 foreign fighters are fighting alongside Taliban

Association for Defending Victims of Terrorism – Reuters reported, the U.N. special envoy for Afghanistan on Friday questioned the Taliban’s commitment to a political settlement, telling the U.N. Security Council the war has entered a “deadlier and more destructive phase” with more than 1,000 civilians killed in the past month during a Taliban offensive.

“A party that was genuinely committed to a negotiated settlement would not risk so many civilian casualties, because it would understand that the process of reconciliation will be more challenging, the more blood is shed,” Deborah Lyons said.

“This is now a different kind of war, reminiscent of Syria, recently, or Sarajevo, in the not-so-distant past,” Lyons said.

Afghanistan’s U.N. Ambassador Ghulam Isaczai urged the Security Council to act to “prevent a catastrophic situation.” He told reporters after the meeting that he was confident the Afghan army could withstand the Taliban offensive and that the country was not yet in a civil war.

Afghanistan’s Permanent Representative to the United Nations Ghulam M Isaczai on Friday said that the Taliban is receiving assistance from foreign fighters of transnational terrorist networks while committing “barbaric” acts in the war-torn country.

“In a deliberate act of barbarism Taliban isn’t alone. They’re assisted by foreign fighters from transnational terrorist networks. Together they are threatening peace, security and stability in Afghanistan and also in our region and beyond, Isaczai said.

“Since mid-April, Taliban and their affiliate foreign terrorist groups launched over 5,500 attacks in 31 provinces with the direct support of over 10,000 foreign fighters of 20 groups, including Al-Qaeda, Lashkar-e-Taiba, Tehreek-i-Taliban Pakistan, Islamic State of Iraq and the Levant, who entered our country and are fighting alongside Taliban,” he said.