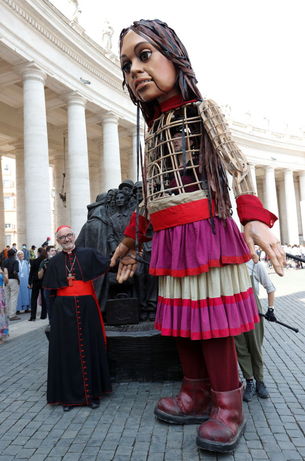 Association for Defending Victims of Terrorism – On Friday morning, visitors to St. Peter’s square in Rome were greeted with the spectacle of a 3.5 meter-tall puppet named “little Amal”, which was set up near the “Angels unawares” monument inside Bernini’s colonnade.

“Little Amal” – a giant puppet of a Syrian girl – is on an 8,000 km journey from Turkey to England, to draw attention to the plight of refugees. Cardinal Michael Czerny says that Amal reminds us that meeting vulnerable migrants and refugees in our midst requires more than just a glance.

Cardinal Michael Czerny, the under-secretary for the Migrants and Refugees Section of the Vatican’s Dicastery for Promoting Integral Human Development was on hand to welcome “Little Amal.” Also present was Bishop Benoni Ambarus, auxiliary bishop delegated for Charity, for Migrants and for the pastoral care of Roma and Sinti.

“Little Amal,” made by Handspring Puppet Company, is at the heart of “The Walk” project, an itinerant theater festival, that seeks to draw attention to the plight of millions of displaced refugees.

It is a giant puppet of a 9-year-old Syrian girl named Amal, who ideally represents all displaced children, many of whom are separated from their parents. It embodies the appeal: “Don’t forget about us” – an urgent call to everyone not to turn a blind eye.

“Little Amal” will travel more than 8,000 kilometers, from Gaziantep, near the Turkish-Syrian border, to Manchester, England. This Friday morning stop in Rome is part of efforts to shine a light on migrant and refugee situations across several cities along Little Amal’s itinerary.

Welcoming “Little Amal”, Cardinal Czerny, noted that the diocese of Rome chose the powerful symbol of the tent recalling Abraham’s generous invitation to the three strangers at the oaks of Mamre, who turned out to have been sent by God. The strangers – “messengers of unexpected good news, offering a new perspective on the future” – told Abraham that they would have a son, something they had longed for and had thought unattainable.

“This teaches us that offering hospitality to unexpected and unknown guests opens up the possibility of an encounter with God,” the Cardinal said, adding that as this biblical passage teaches us, “hospitality generates life.”